Finding Out I Was Pregnant

Thanks for stopping by! I am a Registered Holistic Nutritionist, owner of Random Wellness Co and I am super passionate about keeping health and wellness simple and fun!

Finding Out I Was Pregnant

I can’t believe I am writing this but here I am.

Ok, so let’s start off with when I first found out that I was pregnant. Sadly I feel like this is the least anti-climactic story but at the time it wasn’t because I was taking the pregnancy test in between calls.

I have also been asked if I knew I was pregnant and although I actually didn’t know I was making jokes to Brendan (my husband) the week before that I was. Then when I missed my period the first day I had a strong feeling but was making up excuses as to why I didn’t get it that day.

By later the next day I still hadn’t got it and almost bought a pregnancy test when I went into the drug store/post office but I told Brendan that I was probably overreacting which obviously I wasn’t but something about buying a pregnancy test felt weird to me.

The next morning I still hadn’t gotten my period so I told Brendan he had to drive to the drugstore to get me a pregnancy test because I had a busy morning of calls.

Sure enough, I started recording a podcast interview around 9:00 am and I can hear him already coming back so I was trying to focus on the interview and not the fact that he had left a pregnancy test in the bathroom for me. As soon as I was done with that interview I went to take it nonchalantly. It said to wait 3-5 minutes so my plan was to take it and then go grab Brendan. Well, that didn’t go to plan because as soon as I pulled it out, it was POSITIVE!

Naturally, I just sat there staring at it not knowing what to do with myself then I tried to think of a fun way to tell Brendan. I go to find him only to see him dressed like a dad, holding a Tim Hortons coffee in one hand while pushing the mower with his other hand. I flagged him down to tell him I took it but was too scared to look so that I could record his reaction.

Well, I failed at the recording, but I did get audio of him complaining that I left it on the French side so he couldn’t read the instructions. I thought the double line was pretty obvious and would even be obvious in French but apparently, I was wrong. It took him what felt like an hour to clue in which in reality it was probably a few seconds.

Of course, we had a lovely moment to ourselves, and I pretty much just logged off for the rest of the day EXCEPT the fact I had to go on an Instagram live an hour later but I powered through that and no one expected a thing.

However, it’s so funny looking back because I feel like your life immediately changes as soon as you have a positive test.

I texted my best friend and asked her to call me later so she called me on her way home from work which was luckily long because I immediately had 10000 questions for her because she had a 1-year-old and was obviously still in baby mode. So shoutout to Sara for calming me down the first day and telling me what to do next and also talking to me about cars because an hour after we found out I was like well I guess we will have to say goodbye to the KIA (my old shitty car). Again, your mind goes in all directions as soon as you find out. I thought it would be this lovely experience where we just basked in the glory but my practical brain took over and I was like: “I need a midwife, I need a new car, how will I run my business”.

Regardless, I finally calmed down and was oddly very chill about everything since then. I always thought I would be way more high-strung about things and although I am on top of everything and organized, and also unwell, I am just going with the flow and listening to my body.

Again, this isn’t the most dramatic and cute story ever but it was perfectly us. The part that probably made me laugh the most was watching Brendan read the pregnancy test instructions with Tim Hortons in his other hand.

I hope you enjoyed this more relaxed, more personal post. I will be doing a lot of personal pregnancy and postpartum type content since that is where I am at in my life but I will still be sharing more wellness and lifestyle posts and also be sharing lots of amazing posts from the Random Wellness Collective members. 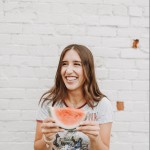 Nicole is a Registered Holistic Nutritionist and Owner of Random Wellness Co.

back to blog home

Welcome to the Random Wellness Blog

check out these posts

Owner of Random Wellness Co. with a passion for all things intuitive nutrition and wellness!

Does your stomach need to chill out a bit? Maybe you need to give you gut some extra love! Download our gut health basics guide to learn how you can support your gut health PLUS free recipes

Random Wellness Co is your one-stop for wellness, artisanal goods, and resources - curated by Nic.

what we do
About
the clubs
blog